I gave for colored girls who have considered suicide/ when the rainbow was enuf  3/5 stars and For Colored Girls 5/5 stars.

for colored girls who have considered suicide/ when the rainbow was enuf is a choreopoem (i.e., a poem that is meant to be performed with added movement along with dialogue) by Ntozake Shange, which was published in 1975 and recently turned into a movie entitled, For Colored Girls by Tyler Perry in 2010.

Shange’s choreopoem was very interesting to read. In the beginning I was confused by Shange’s abbreviations and had to use guess work to figure out what she was saying, but as the choreopoem went on, I got better at discerning what she was saying since she frequently repeated certain words like cd (could) or waz (was). Thank goodness for this because the action in this choreopoem speeds by and if you’re not on point, you’ll easily miss something. Since this was a choreopoem, the actual character building isn’t really meant to be full blown. In addition, Shange’s motives for creating the characters is meant more so for them to represent ideas than for them to actually have personalities.

While I did like this choreopoem, I would have to say without actually seeing a visual interpretation of it (e.g., a theatrical production, the tv movie, or the film adaptation), one could get lost fairly easily. Since I read this choreopoem for an assignment and watched Tyler Perry’s film adaptation in tangent with reading Shange’s work, I have to say, I actually got a better feeling for what Shange was doing with her work from watching Perry’s movie. Without seeing Shange’s work in action, I would have just chalked this read up as an overblown classic, but the visual representation made this piece one of my favorite…movies that is. I know this is harsh, but I still felt as if Shange’s work would be better off packaged as simple poems in written form opposed to as a single unit that is meant to be read as a full chorepoem/play. And yes, I am aware that Shange admits that she did write these poems singuraly and later preformed then as a collective unit however, I must go off of how it was presented to me in it’s published form. 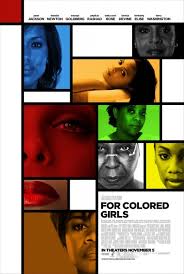 Perry’s film on the other hand was OUT-STANDING! At the time this film came out, I was under the impression that it would be similar to his other works and that the film itself was scary since it deals with subject matter like, abortions and rape. However, I was pleasently surprised to find that Perry handled everything tastefully. The actresses he chose to represent each character was phenomenal and fitting. I especially enjoyed Loretta Devine as the lady in green and Anika Noni Rose as the lady in yellow. These two poured their hearts into their characters and it shows.

This choreopoem is something I would recommend that everybody read and watch at least once. It’s definitely gives one food for thought. But, beware, viewer discretion is advised. Shange’s work isn’t for a younger audience, it’s better suited for individuals who can truly grasp what is being talked about in the poems.

http://youtube.googleapis.com/v/3yd9eJRecAk&source=uds
I LOVE THIS SCENE!

View all posts by Adira